Remembering a Difficult Past 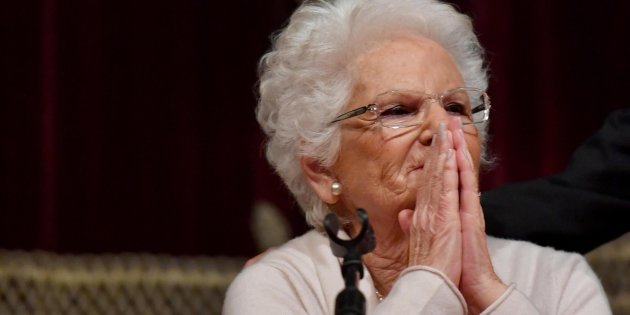 Never before have I used the Teachers’ Blog to explore politics, but the autumn months of the present year mark noteworthy anniversaries.  The world, of course, is celebrating the centennial of the 1918 Armistice ending World War I.  A different event, however, seems to require more urgent commemoration.  During the final portion of 1938, Italy’s government, firmly in Fascist hands, voted on and passed the Leggi razziali—the Racial Laws—restricting the civil rights of the country’s Jewish citizens.

I’m eager to describe the way Italy today has chosen to express its memory of this loathsome legislation.  Before that, though, a bit of history.

Jews first arrived in Italy during the 2ndCentury BCE. Still, Italian lawmakers of 1938 decided that Italians—allegedly Aryan by nature—required defending.

The front page of the November 11, 1938 edition of the reputable Corriere della Sera newspaper: 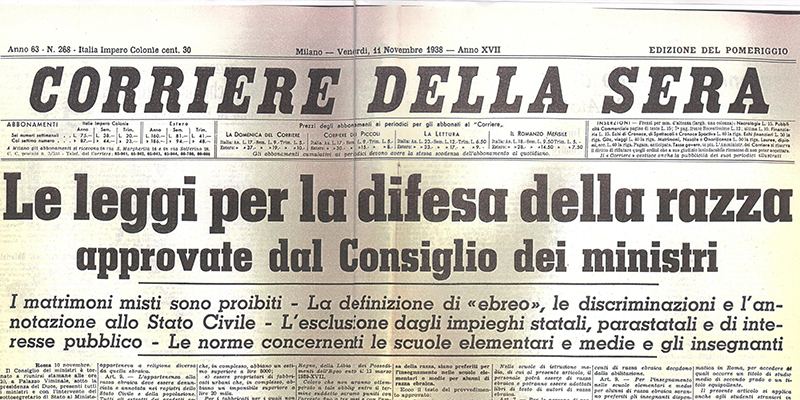 The headline reads “The laws for the defense of the race approved by the Council of Ministers.”

The subheadline elucidates: “Mixed marriages are prohibited—The definition of ‘Jew,’ discriminations and annotations to be made in Civil Status [official documentation of identity]—Exclusion from employment in Government and State-controlled offices, and agencies of public interest—Rules concerning elementary and middle schools as well as teachers.”

To make the new laws readily intelligible to everyone, helpful easy-to-read cartoons and posters were printed.  Here’s one: 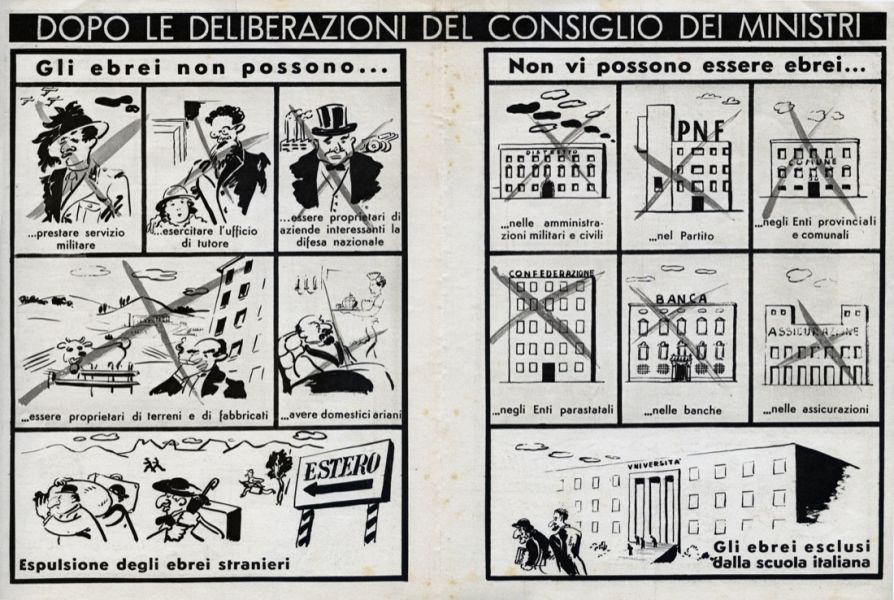 “Following the deliberations of the Council of Ministers,” the page makes plain that “Jews cannot… serve in the military… work as instructors… own businesses concerned with matters of national defense… own land or factories… employ Aryans as servants.”  The left-handpage’s final drawing illustrates how the Racial Laws call for the expulsion of foreign Jews from Italy.  The page on the right goes on to point out: “There can be no Jews… in military and civic administrations… in the Party [PNF stands for the Partito Nazionale Fascista, the National Fascist Party]… in province or town government offices… in State-controlled offices… in banks… in insurance companies.”  The final cartoon depicting hook-nosed Semites explains that “Jews are excluded from Italian schools [including universities, as shown in the picture].”

So what is Italy doing now, in 2018, to commemorate the 80thanniversary of the Racial Laws?  Wonderful things, actually.  And I find myself attributing many of the finest gestures not to the current Prime Minister and Council of Ministers but to a different leader, the President of the Italian Republic.  The job of the Presidente della Repubblicais to protect the unity and fundamental values of the country—over and above the sometimes capricious actions of whatever government happens to be in the driver’s seat at any given moment.

Sergio Mattarella, a Constitutional judge, has been President of the Republic since 2015.  His actions reflect great personal integrity.  In January 2018 he appointed a lovely Jewish woman named Liliana Segre as Senator for Life.  Senator Segre was born in Milan in 1930.  She has all-too-clear a memory of the day in 1938 when suddenly she was told she could no longer go to school—because of her religion.  At the end of January 1944, she was taken to Platform 21 of the Milan Central railway station, and deported in a cattle-car to Birkenau. Seven-hundred and seventy-six Italian children aged 14 or less were deported to Auschwitz-Birkenau.  Thirty-five survived.  Among them, Liliana.

For decades she, like many Holocaust survivors, found it difficult to talks about her experiences.  It wasn’t until the 1990s that she began to visit Italian schools, telling young people what she had lived through.  When she speaks, she projects not only a grandmother’s lovingkindness but also an exceptionally articulate intelligence.  In 2008, the University of Trieste gave her an honorary degree in Law.

Making her a lifetime member of the Italian Senate stands as one of President Mattarella’s early actions to remind the nation that 2018 is the 80thanniversary of the Racial Laws.  When he signed the Decree naming her Senator, he explained that he did so in recognition of her “very high merits in the social field.” 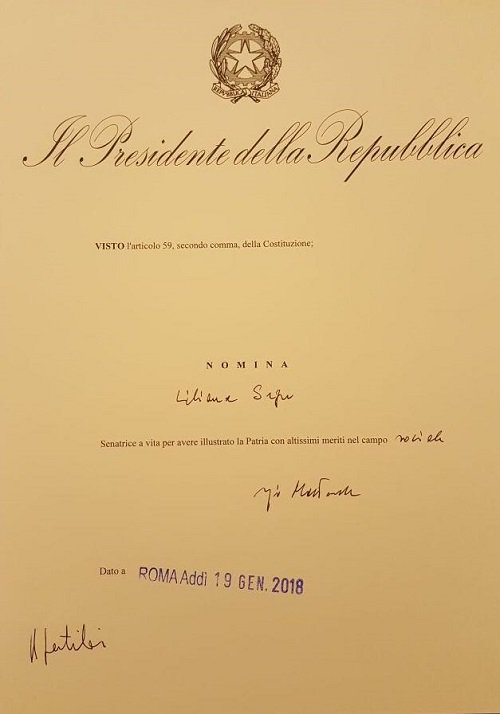 The autumn months of 2018 have seen an impressive number of Italian television programs aired to heighten public awareness of the 1938 Racial Laws.  Newspaper and magazine articles have abounded.  Museums in many cities have offered presentations on the subject.  The Archivio di Stato di Siena—the State Archives of Siena—opened a special exhibition on October 26. 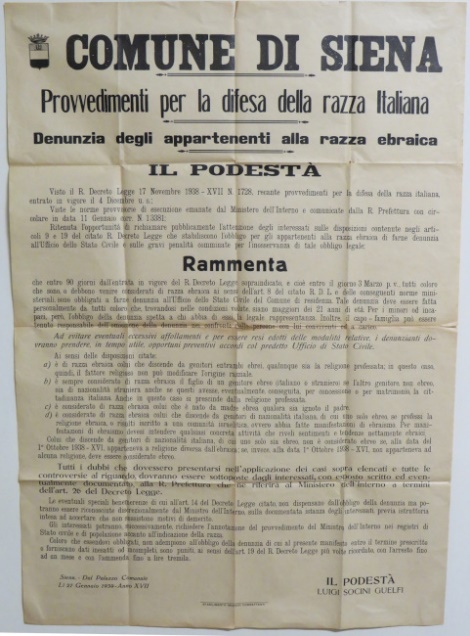 On display at the State Archives of Siena. The titles read “City of Siena / Provisions for the defense of the Italian race. Denunciation of members of the Jewish race.”

Significantly, also toward the end of October, President Sergio Mattarella inaugurated an exhibition entitled “1938: Humanity Denied—From the Italian Racial Laws to Auschwitz.”  And where did he provide for this exposition to be held?  In Rome, at the Palazzo del Quirinale—the palace of the President of the Republic.

In recent years, the world has proved remarkably creative in widening its choice of minority and immigrant groups to designate as dangers to society.  Standing outside a country’s conformity-minded majority is becoming ever less safe.  It is important to note that most Italians in 1938 were not in favor of the enactment of the discriminatory regulations that banned Jewish books, barred Jews from public office, locked Jews out of the classroom as students and as teachers, stripped Jews of their assets, restricted travel, and ultimately cleared the way for confinement and deportation to Death Camps.  Most Italians were happy enough to have Jewish friends, neighbors, classmates, and business associates.  All the same, the Racial Laws went into effect.  Though they did not embody the will of the people, those laws became fact because of the government in power. There’s a lesson to be learned: dangerous governments do dangerous things.  The lesson deserves attention, especially today, as the minority-hating nationalism of the extreme right gains ground in many European countries—and in the United States.